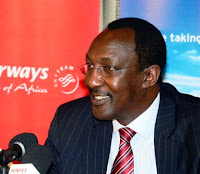 
KENYA Airways (KQ) chief executive officer Titus Naikuni is expected in Namibia this week to hold talks with Air Namibia and government officials on a possible partnership between the two airlines.

Speaking to The Namibian from Nairobi, Naikuni confirmed that KQ was interested in a partnership to benefit both airlines.

“Kenya has a long history with Namibia since pre-independence days and our airline has been very keen to continue this collaboration which will benefit both countries, especially in the tourism and trade sectors,” he said.

Naikuni is a member of a ‘dream team’ that the Kenyan government created in the late ‘90s to turn around a number of non-performing entities. He has been credited with rescuing Kenya Airways when he joined the carrier 10 years ago.


Elaborating on the potential partnership, Naikuni said: “We believe that a relationship with Air Namibia will not only benefit Kenyans and Namibians who are keen to visit each other’s country in the most direct way possible to sample what the countries have to offer each other in tourism, business opportunities, education and general infrastructure among others, but Kenya will be a transit route to more than 926 destinations in 173 countries through KQ’s membership of SkyTeam.


“We will discuss many issues appertaining to what such a partnership entails but among them will be code sharing, which many airlines internationally use. In the case of KQ and other airlines that we have code-sharing relationships with such as Air Mozambique, Air Botswana, Air Malawi and others across Africa and beyond, code sharing opens the whole Skyteam market to airlines via KQ.”

Giving an example of the benefits of code sharing, Nakuini said if someone in China wants to fly to Windhoek, he or she would then fly with China’s Southern Airline which is a SkyTeam member, Tourists would be given an option to book with the airline of their choice – in this case, Air Namibia or KQ.

“Without the code share, the ticket fee would be diverted to other airlines as code sharing is selling by partners on behalf of each other,” he explained.

Air Namibia would also benefit from training at the state-of-the-art KQ Learning Centre in Nairobi.

Kenya’s High Commissioner to Namibia, Peter Gitau, said a partnership between the two airlines would help to improve trade and other partnerships between Kenya and Namibia.

Posted by Wanjah at 1:13 AM No comments: