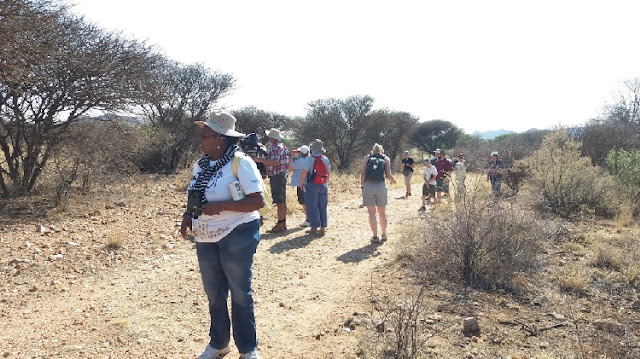 MEMBERS of the Namibia Bird Club marked the first birdwatching event at the vast Omeya Golf and Residential Estate, 30 kilometres from Windhoek on the way to Rehoboth on 23 October.
The event was held courtesy of Omeya resident and Field Guides Association of Southern Africa (FGASA) Namibia director, Armin Junkuhn, who is a also a lecturer at a local university.

It provided not only a taste of the exclusive property that is surrounded by mountains that boast amongst others, the wild mixed with modernity, plenty of water from an underground natural reservoir hence its name Omeya, which means water in Oshiwambo, but also an 18-hole golf course.

When completed, Omeya is expected to boost tourism in Namibia due to the surrounding Auas mountains that provide hiking trails, nature walks, hunting and other camping experiences as well as a four-star hotel that will have conferencing facilities, a children's park, outdoor concerts, and a train stop for those who wish to travel by rail.

Despite the hot and sunny weather that rose to 33 degrees centigrade by midday, the birdwatchers were not disappointed to discover what Omeya had in store for them.

To ensure they sighted as many avifauna as possible, they broke into two groups moving in different directions of the estate's uninhabited areas as well as some of the golf course holes and later met at the end of the walk to compare notes.

In the barely two-hour early morning walk, more than 50 birds had been sighted, a few more than the 47 listed in the Omeya Development bird booklet made available to the birdwatchers at the start of the walk.

Namibia is home to 714 plus bird species of different categories and according to Avibase, the world's bird database and other sources, these include two endemic ones (unique to a geographical area), 14 near endemic, one introduced by humans, 35 rare or accidental while 27 species are globally threatened.

The birds which were sighted flying, perched on top of the variety of acacia/camel thorn trees or moving in the thickets included a mixture of birds of prey such as Whalberg's Eagle (Aquila wahlbergi) Falconidae (unlike hawks, kites and eagles, kill with their beaks instead of talons) such as Rock Kestrel, the common Burchell's Starling and one of Africa's most beautiful birds, the African hoopoe.

Others were Damara red-billed and Southern Yellow-billed hornbills, Acacia pied barbet, African cuckoo (found in woodlands or acacia type savannah that is typical of Omeya and among 15 species found in Namibia of the 138 found worldwide), Grey-backed camaroptera, Ashy tit, Ant eating chat, lots of southern masked weavers, Fork-tailed drongo, African popit, African Palm Swift (which is among nine found in Namibia of the 98 found worldwide), Rock and laughing doves, Kalahari scrub robin, Brubru and many others.

The first birds to be spotted by the different groups during the early morning walk were the African hoopoe also known as Upupa Africana and the Burchell's starling.

The African hoopoe which is distributed widely across southern Africa is not known to be sociable and is often found alone or with a partner. It is easily spotted by its distinctive crown on the head and a contrast of white and black on its back, wings and tail.

There were many African hoopoes spotted during the walk, the first time this writer has seen so many in one spot. 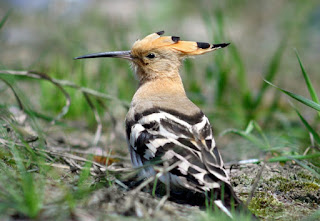 Despite its 'introvert' behaviour, the African hoopoe is said to be at peace breeding anywhere according to Gudrun Middendorff, chairperson of the Namibia Bird Club.

“The interesting thing about this bird is that it can breed anywhere – in a box, on the ground and wherever it feels like,” she explained, adding that they ensure there is a lot of their droppings around that keeps predators at bay.

To add to the rich bird sightings, there were a few animals for the birdwatchers too...a pair of warthogs, plenty of lechwe antelopes, a Damara dik-dik and a yellow mongoose to name a few.

The management has ensured that they have several water holes and salt pans. Some surprises for the day included the groundscraper thrush (gevlekte lyster) which is more often than not found on the ground but on this day, it was perched on a tree where it remained for a long time. Meeting only one guinea fowl, the red-billed spurfowl despite many guinea fowl feathers lying around was another surprise.

As the walk wound up, it was exciting to be rewarded with a golden-tailed woodpecker perched high up on a tree unmoved by the excited but tired group of birdwatchers that discussed it for a while before moving on to the host's residence.

Omeya is definitely living up to its name – wilderness and modernity mixed where animals, birds and residents can thrive undisturbed in natural environments yet provide a tranquil home away from the hustle and bustle of the city.

Posted by Wanjah at 1:53 AM No comments: