The man from Tharaka with a big job

When will Kenyan Government Start Acting on Elephant, Rhino Massacres?


Group fights to save the elephant

PHOTO | CARL DE SOUZA Chinese actress Li Bingbing at the Samburu game reserve during an official visit on May 8, 2013. Li Bingbing is a Unep goodwill ambassador and was in Kenya to highlight Africa’s poaching crisis.  AFP
IN SUMMARY
Some 500 conservationists kicked off the second leg of the Elephants and Rhino Anti-poaching Walk at the world famous Maasai Mara Game Reserve over the weekend.
The awareness campaign dubbed ‘Ivory Belongs to Elephants’ is intended to cover 1,050 kilometres in areas with national parks, game reserves and animal sanctuaries all over the country before it ends in Nairobi.
The event was flagged off at Sekenani gate by Narok deputy governor, Everline Aruasa and preceded to Ngoswani and Narok town, before it proceeded to Mai Mahiu, Naivasha, Nyahururu, Rimuruti, Isiolo, Embu, Kirinyaga and Nairobi.
The walk, which is expected to take 30 days, is the second leg after the first one was held with people walking from Mombasa to Nairobi.
The event was organised by the Elephants Neighbours Centre and sponsored by World Wide Fund for nature, Sarova Hotels, Maniango Safaris and International Fund for Animal Welfare.
The executive director of Elephant Neighbours centre, Mr Jim Nyamu, said they want to create awareness on the value of elephants by educating local communities on the dangers of poaching.
Mr Nyamu urged MPs to uphold the proposed Wildlife Bill.
“We want to create a platform where we educate people living around wildlife to see the importance of wild animals,” he said.
The conservationist noted that tourists visit the country to see animals like elephants but if the numbers dwindled, they would opt for other countries and the nation would lose on revenue.
“Maasai Mara risks losing its glory if the runaway poaching is not brought to an end,” he said.
Mr Patrick Wanjohi of Mountain Rock Camps said when the animal survival is threatened, business people in the industry are also threatened.
“We really support the conservation of wildlife and encourage locals to help in fighting the poaching menace,” said Mr Wanjohi.
Maasai Mara senior warden Stephen Minis, said it was everyone’s responsibility to ensure that poaching is brought to end because it was threatening revenue from the tourism sector.
“Poaching is being done in conservancies. The animals are safer in the parks because we have beefed up security,” said Mr Minis.
He also noted the animals were important resource that generates revenue to the locals’ people and used in the implementation of various projects in the region.
Siana Wildlife Trust chairman Sammy Nkoitoi said that poaching for elephant tusks in the Mara-Serengeti region in the recent past across the border was on the increase and said that there was need to take quick and decisive measures to curb the poaching that is geared towards reducing the animal population.
http://www.nation.co.ke/News/Group-fights-to-save-the-elephant/-/1056/1850554/-/view/printVersion/-/dyidnfz/-/index.html
Posted by Wanjah at 6:18 AM No comments: 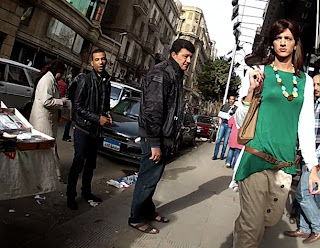 Associated Press/Courtesy of Awel el Kheit - In this undated image made from video released by the producers of "Awel el Kheit," or "the Thread," which aired in May 2013 on the private TV station ONTV, Waleed Hammad walks in a busy shopping district in Cairo, Egypt, dressed as a woman, as a hidden camera crew films him for an investigative story on sexual harassment. The 24-year-old actor dressed conservatively for his mission into the secret world of sexual harassment and abuse on the streets of Cairo, donning a long skirt and sleeved shirt and covering his head like many Egyptian women. (AP Photo/Courtesy of Awel el Kheit)

CAIRO (AP) — Waleed Hammad dressed conservatively for his secret mission into the world of sexual harassment and abuse on the streets of Cairo, donning a long tan skirt and sleeved shirt, and at times covering his head like many Egyptian women.
The 24-year-old actor walked the sidewalks, hidden cameras in tow, for an investigative television report, hoping the broadcast would enlighten national debate about how to combat deep-rooted day-to-day sexual harassment and abuse in this patriarchal society.
Initiatives to counter the problem have mushroomed in recent months. Vigilantes groups have started protecting women at gatherings, particularly at large protests or during national holidays when groping and harassment in crowds is at an all-time high. Activists have offered self-defense classes for women. Social network sites have been started where women can "name and shame" their harassers.
On the other side of the debate are conservative religious clerics and some government officials who blame women, saying they invite harassment and sexual abuse by mixing with men. Their comments have inflamed the discourse, particularly at a time when Egypt's volatile and polarized politics blur social and political issues following the 2011 uprising that ousted longtime autocrat Hosni Mubarak.
As he strolled, Hammad, who wore light makeup to conceal hints of facial hair and accentuate his eyes, was hissed at and verbally abused. In one instance — when he was wearing a head veil — he was taken for a prostitute and offered up to 4,000 Egyptian pounds ($575) for one night.
"I can go wherever I want, do whatever I want very simply, very easily, very casually," Hammad said. "For a woman, it boils down to her having to focus on how she breathes while she is walking. It is not just the walk. It is not just the clothes. It is not what she says or how she looks."
As a woman walking down the street, "you have to be in a constant state of alertness."
What Hammad experienced is something Egyptian women endure every day. While not new to Egypt's conservative society, sexual harassment has grown increasingly violent and visible in the nation, which has an embattled police force and an absence of legislation to address it. Egyptian law defines and criminalizes assault, but not sexual harassment.
"What I learned is that this definitely is not a problem with men only," Hammad said. "It is a problem, a deficiency in the entire society."
A report last month carried out by a U.N. Women agency, Egypt's Demographic Center, and the National Planning Institute found that more than 99 percent of hundreds of women surveyed in seven of the country's 27 provinces reported experiencing some form of sexual harassment ranging from minor harassment to rape.
Mozn Hassan, a women rights activist who works with the victims of sexual abuse, said the problem will fester as long as there are no laws to punish harassers, no investigations into violent abuse and the government fails to admit there is a problem.
This week, at a public meeting to make recommendations to Egyptian President Morsi Mohammed on how to address the problem, Omaima Kamel, presidential adviser on women affairs, said she was seeking realistic statistics on violence against women because she sensed real exaggeration of the numbers reported by some research centers, comments she repeated in media interviews.
Kamel is a leading member of the Muslim Brotherhood, which emerged as the most powerful political faction in Egypt since the uprising. The group has recently criticized a U.N. document being drafted on violence against women. The Brotherhood said it was "deceitful," clashed with Islamic principles and undermined family values. The Brotherhood said it advocated sexual freedoms for women and the right to abortion "under the guise of sexual and reproductive rights."
Besides the daily experience of harassment on the streets of Egypt, sexual assaults at anti-government protests, where women have been groped, stripped and even raped, have risen both in number and intensity during the past year of continued unrest in Egypt.
The United Nations said it had reports of 25 sexual assaults on women at political rallies at Tahrir Square, the center of the uprising, in one week early this year. Operation Anti-Sexual Harassment/Assault, which patrolled the square, reported 19 incidents alone on Jan. 25 — the second anniversary of the start of the uprising — including a case of a teenager raped with a bladed instrument.
Abuse at political events has emboldened activists who seek change, but the television program wanted to show how all Egyptian women live daily with the fear of being sexually harassed or abused.
The program was an online hit, shared by thousands of viewers and lauded as brave, creative, and sparked a comparison between Egypt and other Arab countries.
Lena el-Ghadban, the senior reporter on the program, "Awel el Kheit" or "the Thread" which aired earlier this month on the private TV station ONTV, said the program sought to offer a fresh glimpse into the problem through the eyes of men.
"We want them to try to feel how women feel about sexual harassment," el-Ghadban said. "If the man sees himself as the victim of sexual harassment maybe this could get him to think, 'What am I doing?'"
Men interviewed for the program commonly blamed women for dressing or looking in ways that invited sexual harassment. At the same time, they disclosed how men bribed a coffee shop owner to spray water on the pavement so women would be prompted to lift their long conservative dresses.
They wanted to get a peek at their legs.
http://news.yahoo.com/egyptian-man-disguised-woman-harassed-190024573.html
Posted by Wanjah at 11:25 AM No comments: