Are You Passionate Enough to Do Your Journalism for Free?

Are you passionate enough to do your journalism for free? 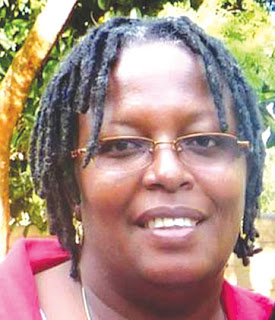 In this four-part series meant to inspire upcoming journalists, former overall African journalists of the year talk about their philosophy and approach to their work. We start with WANJA NJUGUNA, formerly a writer and subeditor at Kenya’s Sunday Nation, now a journalism lecturer at the Namibia University of Science & Technology, a writer and an editor.
In March 2000, Ms Njuguna was joint CNN African journalist of the Year for her feature on the suffering of African married women.  The story, titled “Union made in hell”, told of otherwise-privileged elite women being battered by their educated husbands, subjecting them to marital distress traditionally associated with lower-class marriages. Njuguna  speaks to Richard M Kavuma about the secrets of her journalistic success.

What are the key pillars that have defined your work as a journalist?
Ethics! My own personal ethics played a role in my journalistic ethics. Maybe it has something to do with my background. My father was a bishop and I grew up in a very strict Christian home.  And the values you are taught come in: Don’t lie! Don’t cheat! I was very strict on morals.
And then, the facts.  I always counterchecked the facts. Only once did someone threaten to sue over a story I wrote. But what saved me that time was that I was writing my notes in my notebook – what I realized was very critical. And our lawyer asked for my notebook and, you know the way you write and everything was following each other…. I was being factual. [The guy later abandoned the case]
Digging up facts. I have never gone into a story without knowing the background; without having more information about this person. I just don’t wake up and go to do a story.
There is one story I always give my students. I don’t have a science background, and there was this guy, Professor Odhiambo of the International Centre of Insect Physiology and Ecology  (Icipe) and I was given two hours to prepare for an interview with him. He had just retired from Icipe and he was doing something called food security. It was a new buzzword. I had no clue what food security was then. I went online and dug up as much as I could about food security and about the guy.
By the time I went for interview, I had so much information, the guy was impressed. At the end of it all he was asking me: “So, where did you do your science degree?”
And that is how a journalist should be. Any journalist should have his/her beat, but you should also be open-minded so that when an editor tells you that ‘we have problem here, can you do this?’ you should be open to do it.  I have done stories about so many diverse things but most important was that I prepared myself before going to do the story. Don’t go to a place unprepared; you look stupid.

Tell us about your story process: how do you go from the initial idea to your final copy?
I think it is important to talk to your editor and tell them the idea that you have. When I had an idea, I would weigh it: you look at the environment: is it relevant now? Who is my audience going to be? What do I want to achieve with this story? Am I just going to talk about this famous guy and that’s it? No!
Where do I want to go with it? Is it a story that I can follow up on? I think it is critical that you do follow up on your stories!
After that, I do my investigation; I see whether I will get information. Sometimes there is nothing as bad as having a story idea and then you are going to get stuck at paragraph five and the editor has [allocated] you two pages. So, I go to the editor and say: ‘I have this story.
This is what I have dug up so far, and this is why I want to do the story’. Then you discuss the story. Sometimes the editor will kill it, and tell you: so what?  But don’t kill your story.  Keep looking for interesting [angles] to add into your story.

There is reporting, but there is writing too; How much effort do you put into your final copy?
When I write my story, I make sure it’s grammatically correct. I don’t want the editor to go and start looking at my grammar. So, I always re-read my story several times. If something doesn’t sound right, I go and check it.
When I did my internship at Time Magazine, it took them almost six weeks to publish my first story. You know what they were doing? They were checking the facts, until they were sure that my story was credible; it had all the facts.
And that is something I learnt from Time magazine: I look for all the facts that need to be there and I put them there, so that I do not give the editor a lot of work.  So, by the time I submit my story, I have edited myself thoroughly. I have made it as exciting as can be, and I think the bottom line is that the editor does not have to do so much.
I even give my story a headline [and] sub-headline. In fact what I do, most of the time, I start the story with a headline. Once you have a headline, you have a rough idea; it gives you the focus of that story. And then, even when you have done it, especially if it is a feature story, I always put it aside and go back to it later and look at it with a clear mind and I am like: did I write this?.
You can do that even for a news story. And sometimes what I do, I look for a friend and say: ‘can you look at this story? Just tell me what you think about this story. What aren’t you seeing? What would you like to see?’ And sometimes someone will come back and tell you ‘no no no, this does not make sense’.  Hearing another voice makes me see whether I am communicating to an audience or I am only communicating with myself.

Finally, one last piece of advice to young journalists hoping to be among the best in their generation.
Passion! I still go back to passion. Why are you in journalism? For a lot of people, it was just another job. Are you passionate about what you are doing? Even if you were not paid today, would you still do what you are doing? Are you passionate enough to do your journalism for free?
The next thing is: how does my story impact on the community where I am. There is no point doing a story if it is not going to impact on my community positively.
The voice of my audience is very important. In a lot of our journalism, there is too much of the journalist in the story.
And then the financial bit of it; we have become financial journalists: but let me tell you one thing: the day you decide to accept monetary something to do a story or not to do a story, that is the end of journalism. One day it will come back to you that you took money to kill a story or to do a certain story. Those are the ethics of journalism: even if you have nothing in your pocket, just stick to them.

You kept stressing passion: why is that particularly important for journalism?
Because it keeps you going even when times are very difficult. Sometimes things are difficult but that passion that you have to communicate with the rest of the world about certain things will keep you there.
Posted by Wanjah at 12:01 AM 2 comments: